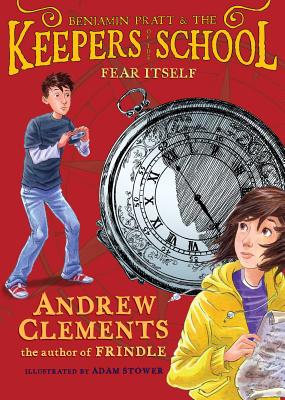 Fear Itself (Benjamin Pratt and the Keepers of the School #2)

Time is ticking as the countdown to total school demolition continues. But in addition to deciphering maritime clues that could save the building, Ben Pratt and his friend Jill have to stay one step ahead of Lyman, the snake posing as the school janitor—who will do anything to preserve the $30 million development deal that pays his salary.

The second book in this riveting six-book series is as action-packed as the first one, culminating in a faceoff between Ben and Lyman. “After five bells sound, time to sit down” makes for a good riddle, but Ben also knows when it’s time to stand up…for Oakes School and for himself.

Adam Stower has a rich imagination and loves fantasy and adventure stories. He studied illustration at the Norwich School of Art and Design and at the University of Brighton, and lives with his daughter in Brighton, England.
Loading...
or
Not Currently Available for Direct Purchase