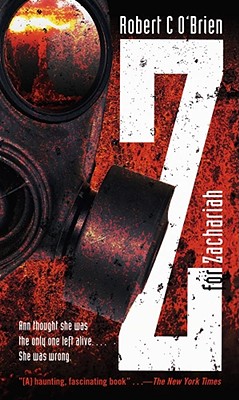 In this post-apocalyptic novel from Newbery Medal–winning author Robert C. O’Brien, a teen girl struggling to survive in the wake of unimaginable disaster comes across another survivor.

Ann Burden is sixteen years old and completely alone. The world as she once knew it is gone, ravaged by a nuclear war that has taken everyone from her. For the past year, she has lived in a remote valley with no evidence of any other survivors.

But the smoke from a distant campfire shatters Ann’s solitude. Someone else is still alive and making his way toward the valley. Who is this man? What does he want? Can he be trusted? Both excited and terrified, Ann soon realizes there may be worse things than being the last person on Earth.

Robert C. O’Brien was born in Brooklyn, New York. He attended Williams College and graduated from the University of Rochester. He was a writer and editor for Newsweek, National Geographic, and other publications. He lived in New York City and then in Washington, DC, with his wife and four children. Z for Zachariah—which is now a major motion picture starring Margot Robbie, Chris Pine, and Chiwetel Ejiofor—was completed by his wife and daughter, with the help of his notes, after his death in 1973. He is also the author of Mrs. Frisby and the Rats of NIMH and The Silver Crown.
Loading...
or support indie stores by buying on
(This book is on backorder)