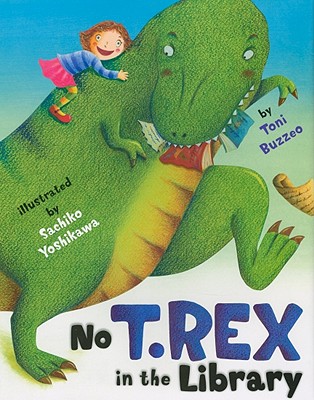 No T. Rex in the Library

It's a quiet morning in the library until a little girl roars out of control! Tess resigns herself to a time-out, but finds that she must be the one who has to maintain order when T. Rex leaps from the pages of a book into real life. Books scatter, knights clatter, and a pirate brandishes a sword as T. Rex leads the charge to the stars.

Will Tess be able to get this T. Rex under control? And will the library ever be the same?

Sachiko Yoshikawa is the illustrator of such books as No T. Rex in the Library by Toni Buzzeo, Kindness is Cooler, Mrs. Ruler by Margery Cuyler; Shout: Little Poems That Roar! by Brod Bagert; and What is Science? by Rebecca Kai Dotlich. She has also illustrated the pop-up book Sammy's Suitcase by Lisa Rojany-Buccieri. Sachiko lives in Washington.
Loading...
or support indie stores by buying on