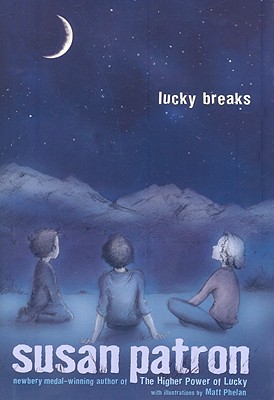 "Eleven is much more intrepid than only ten."

On the eve of her eleventh birthday, Lucky wants to let loose and become intrepid; she's ready for life to change. But Hard Pan (population 43) drones on like it always has: Lincoln all tied up in knotty matters, Miles newly diagnosed as a genius but as needy as ever, Brigitte running her Café and trying to figure out what it means to be American.

Enter Paloma, tagging along on a visit to Hard Pan with a pack of hungry geologists. She's smart and pretty and fun -- definitely best-friend material. But will Lucky be able to cope with tomato worms, Short Sammy's mysterious box, the potential for disaster when Paloma's parents visit Hard Pan, and Lincoln's fame among knot tyers of the world?

Lucky's intrepidness is put to the test in this satisfying sequel to the Newbery Award-winning The Higher Power of Lucky.

Matt Phelan's black-and-white illustrations first appeared in The Seven Wonders of Sassafras Springs by Betty G. Birney. His picture books include The New Girl...and Me and Two of a Kind, both written by Jacqui Robbins. Matt lives in Philadelphia, Pennsylvania.
Loading...
or
Not Currently Available for Direct Purchase