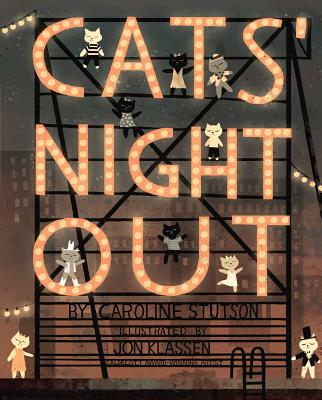 Cats are out for a night on the town in this lively picture book about counting, dance, and music from Carline Stutson and Caldecott medalist Jon Klassen.

From two cats waltzing to twenty cats in a conga line, dancing felines take to the streets, the fire escapes, and the rooftops in this charming concept picture book that is part counting and part introduction to music, dance, and rhythm. The short rhyming text makes it a perfect read-aloud treat, and with vivid illustrations from a breakout DreamWorks animator, readers and listeners alike will be thrilled to see what happens one night on Easy Street when a pair of cats start to groove to the beat.

Praise For Cats' Night Out…

"the detailed cityscapes, hidden numbers, and appealing big-city cats will give little ones plenty to explore."—Booklist

"...Klassen’s retro-looking illustrations of a posse of cool cats, in pale pink tuxedos and poodle skirts, are fun to look at. Lights dimly glow in the background from elegant French casements and alley tenements alike, as though the black, white and gray cats had the free run of the city."--New York Times, August 15th 2010

Caroline Stutson was born in New York City. She earned her BA in theater from the University of Denver and her degree in early childhood education from Metropolitan State College in Denver. A former kindergarten and reading teacher, Ms. Stutson now lives in Littleton, Colorado, where she works as a puppeteer and storyteller at the Highlands Ranch Library.

Jon Klassen is a Canadian-born author-illustrator. He has written and illustrated the acclaimed Hat series, including I Want My Hat Back, This Is Not My Hat, and We Found a Hat. Highlights of his illustrated books are Cats’ Night Out by Caroline Stutson, Sam & Dave Dig A Hole by Mac Barnett, The Dark by Lemony Snicket, and The Wolf, The Duck & The Mouse also by Mac Barnett. His books have won a Caldecott medal and two Caldecott honors and other international awards. He lives in Los Angeles, California, with his wife and son.
Loading...
or support indie stores by buying on