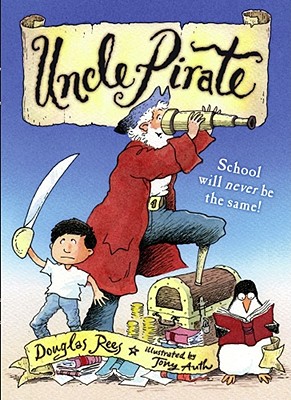 It's not every day that a pirate -- and his talking penguin -- show up at the front door! But that's exactly what happens when Wilson's long-lost uncle comes to live with his family. Desperate Evil Wicked Bob and his sidekick, Captain Jack, are not ordinary houseguests. They're not ordinary anything. Uncle Pirate is having a spot of trouble adjusting to life on land. And Captain Jack wants to go to school to learn to read. Unfortunately, Very Elementary is as far from shipshape and Bristol fashion as a school could be. Until Uncle Pirate steps in, that is....

Set sail for a classroom adventure from mollymockery to mathematics in this story of a boy who has what every kid wants -- a pirate for an uncle.

Tony Auth has been the editorial cartoonist for the Philadelphia Enquirer since 1971. He won a Pulitzer Prize for his work in 1976, as well as five Overseas Press Club Awards and the Sigma Delta Chi Award for Distinguished Service in Journalism. His cartoons are distributed around the world by Universal Press Syndicate.
or
Not Currently Available for Direct Purchase
Copyright © 2020 American Booksellers Association