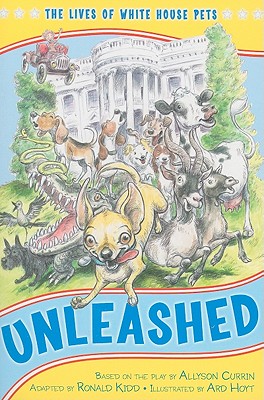 The Lives of White House Pets

Alongside the politicians and dignitaries, some crazy pets have lived in the White House. From John Quincy Adams' pet alligator all the way to Bo Obama, first families have always been open to four legged friends. The Kennedy Center is creating these stories in conjuction with an educational presidential initiative they are creating which also includes plays and displays at their headquarters in Washington DC.

Ard Hoyt has illustrated a number of books, including the New York Times bestsellers I’m a Manatee by John Lithgow and The Hair of Zoe Fleefenbacher Goes to School by Laurie Halse Anderson. Ard lives with his wife and five daughters in Bentonville, Arkansas.

Ronald Kidd is the author of the highly acclaimed Monkey Town: The Summer of the Scopes Trial, as well as On Beale Street. His novels of adventure, comedy, and mystery have received the Children's Choice Award, an Edgar Award nomination, and honors from the American Library Association, the Library of Congress, and the New York Public Library. He is a two-time O'Neill playwright who lives in Nashville, Tennessee.
or
Not Currently Available for Direct Purchase
Copyright © 2020 American Booksellers Association