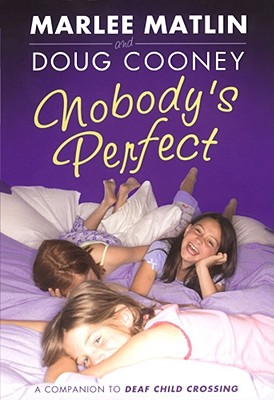 Megan has spent forever planning her positively purple birthday sleepover. She's even made glittery purple invitations for every girl in her class. Then a new girl, Alexis Powell, joins their class. Alexis seems perfect: She's smart, pretty, and rules the soccer games on the playground. But no matter how hard Megan tries to be a friend to Alexis, the new girl is aloof or rude. At first Megan thinks Alexis is shy. Then Megan starts to fear that Alexis is treating her differently because she's deaf. When the girls are forced to collaborate on a science fair project, Megan learns the truth -- and realizes that nobody's perfect.

Once again Marlee Matlin draws on experiences from her own childhood to tell Megan's story. In this funny, poignant book, readers will root for Megan, a spirited young girl who doesn't let anything stand in her way.

Marlee Matlin, deaf since she was eighteen months old, won the
Academy Award and the Golden Globe for Best Actress for her role in
Children of a Lesser God. She was nominated for Emmy Awards for
her performances in Seinfeld, Picket Fences, The
Practice, and Law & Order: SVU. Her film credits include
It's My Party and What the Bleep Do We Know!? She is the
author of Deaf Child Crossing. She has made numerous television
appearances and currently appears on The L Word. Marlee Matlin
lives in Los Angeles with her husband and four children. Visit her at
www.marleeonline.com.

Doug Cooney is the author of the middle-grade novels The
Beloved Dearly and I Know Who Likes You. His musical
adaptation of George Saunders's The Very Persistent Gappers of
Frip recently premiered at the Kirk Douglas Theatre in Los Angeles,
produced by the Mark Taper Forum P.L.A.Y. Cooney also teaches songwriting
and collaboration for Voices Within, an educational outreach program of
the Los Angeles Master Chorale. He divides his time between Los Angeles
and South Florida. You can visit him at www.dougcooney.com.
or
Not Currently Available for Direct Purchase
Copyright © 2020 American Booksellers Association