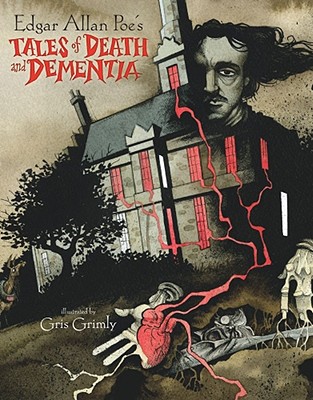 “Be very scared, as these are the best of Poe's chilling tales of horror. Creep show illustrations from master Grimly add to the macabre. Not for the faint at heart, these are best suited for readers 10 and older.”
— Maureen Palacios, Once Upon a Time, Montrose, CA
View the List

Stories of lost love, lost ways . . . and lost minds! Gris Grimly’s mysterious, morbid, and macabre illustrations capture four Poe classics with an unmatchable ghoulish charm. This second installment of illustrated Poe tales, a companion to Edgar Allan Poe’s Tales of Mystery and Madness, includes the perennial favorite The Tell Tale Heart, as well as The System of Dr. Tarr and Professor Fether, The Oblong Box, and The Facts in the Case of M. Valdemar. With little trimming and lots of gory visuals, these stories have never looked better or more frightening!

Gris Grimly lives in Pasadena, California, where he runs the Mad Creator Studio. He is also the illustrator of the New York Times bestselling The Dangerous Alphabet by Neil Gaiman, Edgar Allan Poe’s Tales of Mystery and Madness and The Legend of Sleepy Hollow. He also wrote and illustrated Gris Grimly’s Wicked Nursery Rhymes. You can learn more about him at www.madcreator.com.

Edgar Allan Poe (1809-1849) was an American writer, poet, and critic.  Best known for his macabre prose work, including the short story “The Tell-Tale Heart,” his writing has influenced literature in the United States and around the world.
or support indie stores by buying on
Copyright © 2020 American Booksellers Association