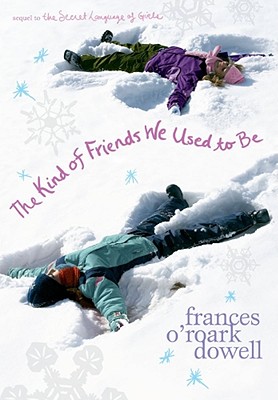 Well, except for last year when they weren't friends anymore....

And except for this year when they both want to be friends again, but just don't know how.

But the thing is, even as they are trying to fix their broken friendship, they are becoming more and more unalike. And that's becoming harder and harder to deal with. Well, it would be a lot easier if Kate would just take some of Marylin's fashion advice. Ballet flats would look so much better than those big black combat boots. Feminine. But Kate doesn't want to be feminine. She wants to learn guitar and write her own songs; she wants to be the exact opposite of the middle-school cheerleaders. And maybe if Marylin would just stick up for herself and not get bullied by Mazie (the Meanest Cheerleader Ever) into judging anyone who's the least bit different, Marylin and Kate could be real friends again.

Funny, realistic, and incredibly insightful, Edgar Award-winning novelist Frances O'Roark Dowell explores the shifting terrain of middle-school friendship in the companion book to the well-loved The Secret Language of Girls.