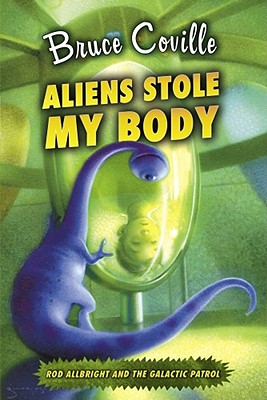 Aliens Stole My Body (Rod Allbright and the Galactic Patrol)

Rod Allbright has found his father -- but lost his own body! It's been stolen by BKR, the most fiendish villain in the galaxy, which leaves Rod sharing the body of a one-eyed, blue alien named Seymour.

Alas, when it comes time to go after BKR, Rod is forced to stay behind so that the little villain won't be able to get at the world-destroying secret locked in Rod's brain.

Stranded on an alien planet with only Madame Pong, Seymour, Snout, and his annoying cousin Elspeth for company, Rod fumes at being left behind. Little does he know he's about to be drawn into a web of alien plots that will test his courage to the utmost -- and ultimately bring him face-to-face with BKR.