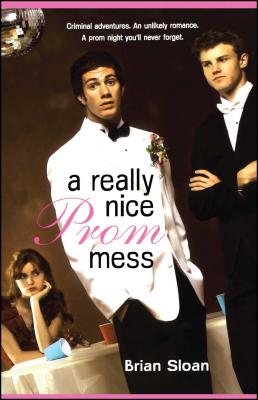 Cameron doesn't want to go to prom. Not with his boyfriend, Shane, and definitely not with his fake date, Virginia. Sure, it's senior prom, it's the end of high school, and Virginia's drop-dead gorgeous. But none of that matters to Cam, who's never liked any high school dance. Ever.

Then an unexpected kiss changes everything, and Cam needs to make a quick exit. After teaming up with a waiter who's been dealing drugs in the bathroom, Cam leaves the prom. But his night is far from over. From a high-speed car chase, to a stop at the after-prom party, to a bar with a wild dance contest...Cam's night finally ends in the most unlikely of romances.

In his first novel for young adults, filmmaker Sloan creates a bold, sassy comedy of errors starring Cameron Hayes, a gay high-school senior in Washington, D.C., who makes the mistake of trying to play "straight" man on the night of his high-school prom. Plans for the evening are simple in principle: Cameron and his boyfriend, Shane, will take two "fake" dates to the dance and meet up afterwards. However, little goes as planned. Cameron's date turns out to be a hot-tempered lush, who is none too pleased to discover her escort's sexual preference, and Cameron makes a pass at Shane's date, which brings the males to blows. Both guys get in trouble with the vice principal and Cameron narrowly escapes punishment by making a daring getaway with a drug dealer he meets in the restroom. Any prom disasters readers may have experienced will pale in comparison to the fiascoes recorded here. The remainder of Cameron's evening is a thrilling but unsettling roller-coaster ride as he speeds from one location to another, linking up with some unlikely companions, including a deaf male stripper, a burly football player and a gay cop who eventually rescues Cameron from his nightmare. In a mere 12 hours, Cameron's world has turned completely upside-down but somewhere along the way he gains some insight into his doomed relationship with Shane and into himself. The author's impeccable sense of comedic timing and cast of offbeat characters will keep laughs coming and make larger-than-life events easy to swallow. Ages 12-up.

Brian Sloan is a writer, director, and producer working in film/TV for more than twenty years. He received his masters in film at NYU in 1993, and since then his work has screened at more than 100 film festivals worldwide, including Sundance, Berlin, and Toronto. He has written and directed two features—the romantic comedy I Think I Do and the indie drama WTC View—and he recently cowrote and produced August. His short films Pool Days and Bumping Heads appeared in the Boys Life shorts anthologies, which he also executive produced. On TV, Brian coproduced and wrote for Discovery’s Cookin’ In Brooklyn, and he has also directed and produced pilots for MTV, Logo, and NBC. Currently, he is working on an adaptation of his second novel, Tale of Two Summers, into a twelve-part series called Best Summer Ever that will premiere online next year. For more details, go to BestSummerEver.tv or like the show on Facebook.com/BestSummerEverSeries.
Loading...
or support indie stores by buying on