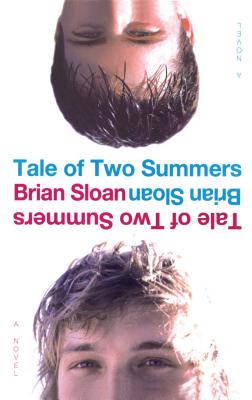 You are in L-O-V-E. Notice how I have no hesitation spelling it. At all. Reason? That was just the wildest entry you've posted! Ever....You are so seeing the world through the eyes of L-O-V-E.

A ten-year best friendship is put to the test when Chuck and Hal spend their first summer apart falling for two questionable mates: a sexy Saudi songstress and a smokin' hot French punk. As Chuck heads off to summer theater camp and Hal stays in their hometown, learning how to drive, they keep in touch via blogging, reporting to each other about their suddenly separate lives and often ridiculous romantic entanglements. As both their relationships take some unexpected turns, Hal and Chuck struggle to come to terms with their growing differences while trying to keep their friendship alive.

Brian Sloan is a writer, director, and producer working in film/TV for more than twenty years. He received his masters in film at NYU in 1993, and since then his work has screened at more than 100 film festivals worldwide, including Sundance, Berlin, and Toronto. He has written and directed two features—the romantic comedy I Think I Do and the indie drama WTC View—and he recently cowrote and produced August. His short films Pool Days and Bumping Heads appeared in the Boys Life shorts anthologies, which he also executive produced. On TV, Brian coproduced and wrote for Discovery’s Cookin’ In Brooklyn, and he has also directed and produced pilots for MTV, Logo, and NBC. Currently, he is working on an adaptation of his second novel, Tale of Two Summers, into a twelve-part series called Best Summer Ever that will premiere online next year. For more details, go to BestSummerEver.tv or like the show on Facebook.com/BestSummerEverSeries.
Loading...
or support indie stores by buying on