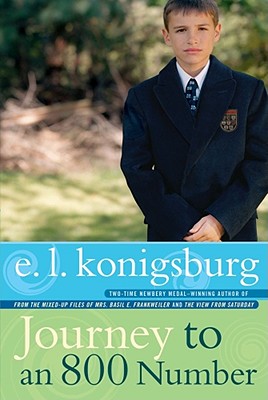 Journey to an 800 Number

Maxmillian (also known as Bo) Stubbs's mother has just married a very rich man. Bo is looking forward to moving into his stepfather's big house and attending the snooty Fortnum School in the fall. Everything about Bo's new life will be first class, just like his new navy blazer with the Fortnum crest.

While his mother is on her honeymoon, Bo spends a month with his father, Woody, an itinerant camel-keeper who entertains at shopping malls and conventions around the country. Woody is decidedly not first class, and neither is the eccentric cast of characters Bo meets on their travels. But Bo learns a lot from them that isn't taught at Fortnum...about love, loyalty, and the art of pretending -- and that class and first class are not necessarily the same thing.

Praise For Journey to an 800 Number…

"The story has [Konigsburg's] usual combination of originality of conception, felicity of style, and suffusion of wit." -- Bulletin of the Center for Children's Books, starred review