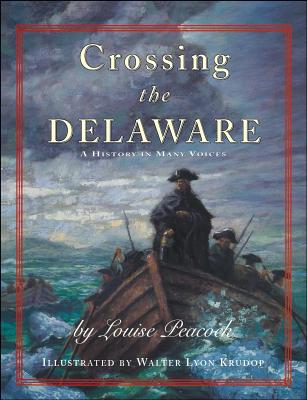 A History In Many Voices

The Revolution did seem nearly over in the harsh winter of 1776. The Continental Army, led by General George Washington, had suffered many defeats and had made many retreats. Now the soldiers found themselves encamped on the Pennsylvania side of the Delaware River, across from three Hessian regiments occupying the town of Trenton, New Jersey. Tired, cold, ill-clothed, and ill-equipped to fight, most of them were ready to go home when their enlistments were up. Only decisive action could possibly win General Washington a battle -- and save the Revolution.

A variety of voices in a variety of forms -- a present-day narrator, the letters of a fictional soldier, and true accounts from the time -- are brought together with period images and Walter Lyon Krudop's dramatic art to make vivid the critical moments of Washington's crossing of the Delaware. Readers cannot help but come away with a new appreciation of what the Battle of Trenton means for us today.

Louise Peacock, who has always been interested in history, took a PhD in medieval studies before turning to children's liturature. Her first book, Crossing the Delaware, was inspired by a trip with her son to Washington's Crossing. The book, also told in many voices, was praised by Booklist with a starred review.At Ellis Island continues this unique method of historical exploration. Dr. Peacock lives in Haslett, Michigan.

Walter Lyon Krudop was born in Elizabeth, New Jersey, in 1966. He had his first painting lesson when he was eight years old and later studied illustration at the School of Visual Arts in New York. He has illustrated a number of books for young readers, including The Good-Night Kiss and Wake Up, Little Children by Jim Aylesworth; Black Whiteness by Robert Burleigh; and Crossing the Delaware by Louise Peacock. He lives with his wife, Sara, in New York City.
or support indie stores by buying on
Copyright © 2020 American Booksellers Association