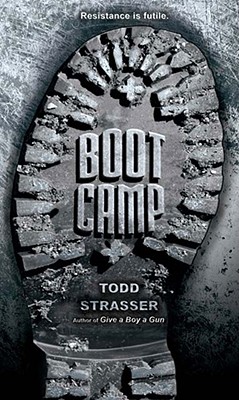 In the middle of the night Garrett is taken from his home to Harmony Lake, a boot camp for troubled teens. Maybe some kids deserve to be sent there, but Garrett knows he doesn't. Subjected to brutal physical and psychological abuse, he tries to fight back, but the battle is futile. He won't be allowed to leave until he's admitted his "mistakes" and conformed to Harmony Lake's standards of behavior. And there's no way to fake it. Beaten, humiliated, and stripped of his pride, Garrett's spirit is slowly ebbing away. Then he hears whispers of an escape plot. It's incredibly risky -- if he's caught, the consequences will be unthinkable -- but it may be his only way out.

In this tense, riveting novel, award-winning YA author Todd Strasser reveals what really goes on in highly secretive -- and notoriously dangerous -- boot camps, a stealth prison system where any teenager under the age of eighteen can be imprisoned at his parents' whim.

Todd Strasser has written many critically acclaimed novels for adults, teenagers, and children, including the award-winning Can’t Get There from Here, Give a Boy a Gun, Boot Camp, If I Grow Up, Famous, and How I Created My Perfect Prom Date, which became the Fox feature film Drive Me Crazy. Todd lives in a suburb of New York and speaks frequently at schools. Visit him at ToddStrasser.com.
or
Buy Here
Copyright © 2020 American Booksellers Association