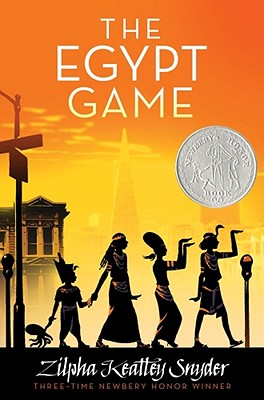 The first time Melanie Ross meets April Hall, she's not sure they have anything in common. One look at April's upswept hair, false eyelashes, and ragged fox-fur collar is enough to convince Melanie that April won't have an easy time fitting in with the sixth graders at Wilson School.

But April has some surprises in store, like the fact that she enjoys reading and playing imagination games just as much as Melanie does. The two even discover that they both love anything to do with ancient Egypt! In a storage yard behind the A-Z Antiques and Curio Shop, Melanie and April start to play the Egypt Game.

Before long, there are six Egyptians instead of two. They meet to wear costumes, hold ceremonies, and work on their secret code. Everyone enjoys the game until strange things begin to happen. Has the Egypt Game gone too far?

With a touch of charm and a whole lot of imagination, Zilpha Keatley Snyder transforms an abandoned junkyard into an Egyptian court in this Newbery Honor-winning mystery.

Praise For The Egypt Game…

"Tailor-made for children who love the thought of rambling mansions, garden mazes, and hidden treasure."

"An increasingly captivating story, which builds to a risky and daring climax."

Zilpha Keatley Snyder is the author of The Egypt Game, The Headless Cupid, and The Witches of Worm, all Newbery Honor Books. Her most recent books include The Treasures of Weatherby, The Bronze Pen, William S. and the Great Escape, and William’s Midsummer Dreams. She lives in Mill Valley, California. Visit her at ZKSnyder.com.
Loading...
or support indie stores by buying on