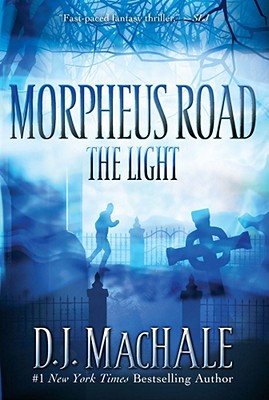 Marshall Seaver is being haunted.

It begins with mysterious sounds, a fleeting face outside a window, a rogue breeze—all things that can be explained away. That is, until he comes face-to-face with a character who only exists on
the pages of a sketchbook—a character Marshall himself created.

Marshall has no idea why he is being tormented by this forbidding creature, but he is quickly convinced it has something to do with his best friend, Cooper, who has gone missing. Together with Cooper’s beautiful but aloof sister, Sydney, Marshall searches for the truth about his friend while ultimately uncovering a nightmare that is bigger and more frightening than he could ever have imagined.

Number one New York Times bestselling author D. J. MacHale launches his eerie new trilogy with a story so packed with chilling suspense, readers will want to sleep with the light on.

The voices grew louder, more urgent, as if they were running out of time. It sounded like gibberish. It was gibberish. I knew that. It was a dream, right? That’s what I told myself and it calmed me down. That is, until I heard a single word break through the haze as plain and clear as if someone had leaned over and spoke directly into my ear.
--“Morpheus.”

Praise For The Light (Morpheus Road #1)…