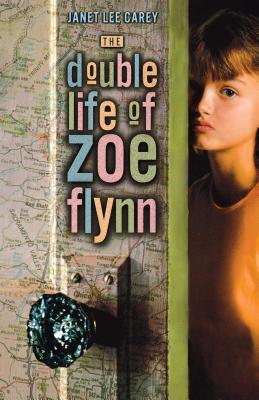 Zoe Flynn has a secret.

She used to live in California, in a big old house -- the best house in the world really -- at 18 Hawk Road. It rambled and creaked and was full of good hiding places. She used to have a best friend named Kellen who lived right down the road, and a dog named Merlin who loved to play with her. But now she lives in a little town in Oregon, and everything has changed.

Now, Zoe has to be careful. Careful that she doesn't tell anyone, not her friends or her teacher or especially that cop who's been watching her, that she doesn't live at 18 Hawk Road anymore. That now her family lives in an old green van that's cramped and dirty and doesn't even work all the time. Zoe's always hoping that someday she'll find her way back home....

Lyrically written by Janet Lee Carey, The Double Life of Zoe Flynn is a moving novel about hope, family, friendship, and the true definition of a home.

JANET LEE CAREY grew up in Marin County California surrounded by whispering redwoods. Sunlight cut through ocean mist and fingered through the branches. It was in this magical place that she first dreamed of writing books. Her award-winning teen fantasy novels are translated into many languages. Some include: The Dragons of Noor, which won a Teens Read Too Gold Star Award for Excellence, Stealing Death, which received a School Library Journal starred review, Dragon’s Keep, an ALA Best Books for Young Adults, and Wenny Has Wings, a Mark Twain Award recipient and a Sony Feature Film Japan, 2008. Janet lives with her family, dusty book stacks, and imperious cat near Phantom Lake in Washington. Visit Janet online at www.janetleecarey.com.
or support indie stores by buying on
Copyright © 2020 American Booksellers Association