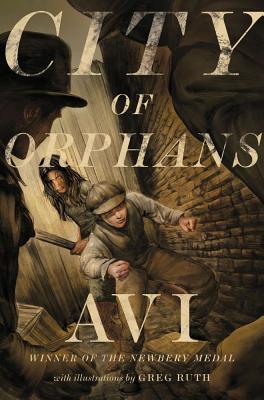 The streets of 1893 New York are full of life: crowded, filthy, dangerous. If you are a newsboy like thirteen-year- old Maks Geless, you need to watch out for Bruno, leader of the Plug Ugly Gang whose shadowy, sinister boss is plotting to take control of all the newsies on the lower East Side. With Bruno’s boys in fierce pursuit, Maks discovers Willa, a strange girl who lives alone in an alley. It is she, stick in hand, who fights off the Plug Uglies--but further dangers await. Maks must find a way to free his sister Emma from The Tombs, the city jail where she has been imprisoned for stealing a watch at the glamorous new Waldorf Hotel. Maks, believing her innocent, has only four days to prove it. Fortunately, there is Bartleby Donck, the eccentric lawyer (among other employments) to guide Maks and Willa in the art of detection. Against a backdrop alive with the sights and sounds of tenement New York, Maks, as boy detective, must confront a teeming world of wealth and crime, while struggling against powerful forces threatening new immigrants and the fabric of family love.

Dickensian street action comes to New York’s Lower East Side in this gripping story, set in 1893, of
newsboy Maks, 13, who feels “hungry twenty-five hours a day.” After rescuing a filthy, homeless girl,
Willa, Maks takes her to the crowded tenement he shares with his struggling Danish immigrant family.
Pursued by Bruno, the leader of the Plug Ugly street gang, Maks is desperate to save his sister, Emma,
who was imprisoned after being falsely accused of stealing a watch from the Waldorf Hotel, where she
worked as a cleaner. Just as compelling as the fast-moving plot’s twists and turns is the story’s social
realism, brought home by the contrasts between the overcrowded, unsanitary slums (“No water, gas,
electricity”) and the luxurious Waldorf. Then there are the unspeakable conditions in prison, where, even
as a prisoner, Emma must pay for food. Avi writes in an immediate, third-person, present-tense voice,
mostly from Maks’ colloquial viewpoint (“He’s full of heartache, but no one is seeing it”), with occasional
switches to Willa and to the desperate young gangster leader. Threading together the drama are tense
mysteries: Is Willa really an orphan? Who stole the watch? Pair this riveting historical novel with Linda
Granfield’s 97 Orchard Street, New York: Stories of Immigrant Life (2001), a nonfiction account of Lower
East Side tenements.