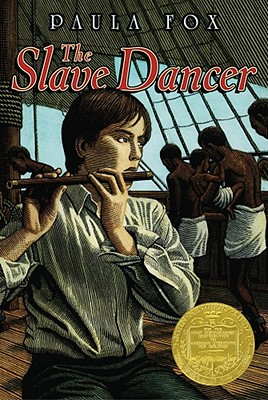 In this iconic, wrenching Newbery Medal winning book, a young Louisiana boy faces the horrors of slavery when he is kidnapped and forced to work on a slave ship.

Thirteen-year-old Jessie Bollier earns a few pennies playing his fife on the docks of New Orleans. One night, on his way home, a canvas is thrown over his head and he’s knocked unconscious. When he wakes up, Jessie finds himself aboard a slave ship, bound for Africa. There, the Moonlight picks up ninety-eight black prisoners, and the men, women, and children, chained hand and foot, are methodically crammed into the ship’s hold. Jessie’s job is to provide music for the slaves to dance to on the ship’s deck—not for amusement but for exercise, as a way to keep their muscles strong and their bodies profitable.

Over the course of the long voyage, Jessie grows more and more sickened by the greed of the sailors and the cruelty with which the slaves are treated. But it’s one final horror, when the Moonlight nears her destination, that will change Jessie forever.

Set during the middle of the nineteenth century, when the illegal slave trade was at its height, The Slave Dancer not only tells a vivid and shocking story of adventure and survival but depicts the brutality of slavery with unflinching historical accuracy.

Praise For The Slave Dancer…

"Movingly and realistically presents one of the most gruesome chapters of history." -- Booklist, starred review

Paula Fox (1923–2017) wrote books for children and adults, and her work for children earned her the Hans Christian Andersen Award, the Newbery Award, and the National Book Award.
Loading...
or support indie stores by buying on