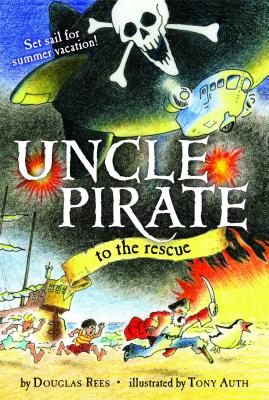 Uncle Pirate to the Rescue

A badly spelled message in a bottle addressed to Uncle Pirate appears at Wilson’s front door, and Mom starts baking bad news pie—this can’t be good. Uncle Pirate’s formerly mutinous crew is marooned on an island! Though Uncle Pirate is loyal to his new crew at Very Elementary, he cannot desert his old shipmates and sets off to find them. But when he doesn’t return, it’s Uncle Pirate who needs rescuing! Wilson, Captain Jack the penguin, Ms. Quern the school secretary, and sneaky Principal Purvis set off in a blimp to save the day in this rollicking read that’s ideal for adventurous young readers.

Tony Auth has been the editorial cartoonist for the Philadelphia Enquirer since 1971. He won a Pulitzer Prize for his work in 1976, as well as five Overseas Press Club Awards and the Sigma Delta Chi Award for Distinguished Service in Journalism. His cartoons are distributed around the world by Universal Press Syndicate.
Loading...
or support indie stores by buying on