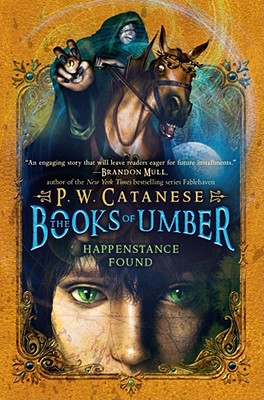 Twelve-year-old Happenstance awakens in a cave with no memory of who he is or how he came to be there. Soon a mysterious trio arrives to take him away: the explorer Umber, the shy archer Sophie, and Oates, whose strength and honesty are both brutal. Hap and his new acquaintances narrowly escape the cavernous underworld and make their way to Lord Umber's bustling jewel of a harbor city, Kurahaven.

Once there, Hap learns that Lord Umber is an extraordinary man -- he's a merchant, adventurer, inventor, royal adviser, and chronicler of all things monstrous and magical. But Umber's accomplishments can't answer the question closest to the boy's heart: Who is Happenstance?

Desperate to uncover clues in his new, baffling surroundings, Hap accompanies Umber on dangerous and unusual missions. But Hap soon learns that there are powerful enemies inside the kingdom, and a ruthless assassin is hot on his trail. Faced with many unknowns, Hap knows one thing is certain: There's a reason Umber has chosen him...if only he could determine it.

P. W. Catanese's richly spun fantasy chronicles one boy's quest for answers and hope in a world riddled by knowledge and power corrupted.