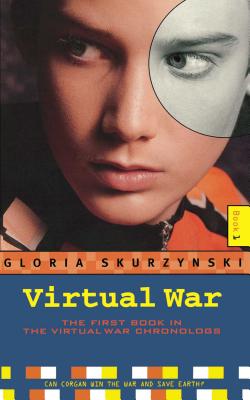 Imagine a life of virtual reality -- a childhood contained in a controlled environment, with no human contact or experiences outside of the world of computer-generated images.

Corgan has been genetically engineered by the Federation for quick reflexes, high intelligence, and physical superiority. Everything Corgan is, everything he has ever seen or done, was to prepare him for one moment: a bloodless, computer-controlled virtual war.

When Corgan meets his two fellow warriors, he begins to question the Federation. Now Corgan must decide where his loyalties lie, what he's willing to fight for, and exactly what he wants in return. His decisions will affect not only these three virtual warriors, but all the people left on earth.

Gloria Skurzynski is the author of more than fifty books for children and young adults, including Virtual War, The Clones, and The Revolt. Her books have won numerous awards, among them the Christopher Award, the Spur Award from the Western Writers of America, the Golden Kite Award, and the Science Book Award from the American Institute of Physics. She lives with her husband, Ed, in Boise, Idaho. You can visit her website at gloriabooks.com.
Loading...
or support indie stores by buying on