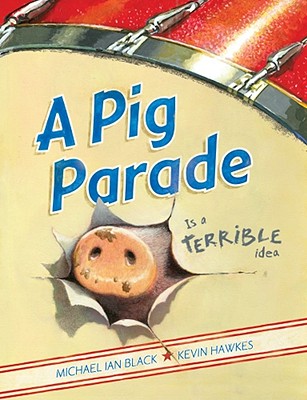 A Pig Parade Is a Terrible Idea

Could anything possibly be more fun than a pig parade!? You wouldn't think so. But you'd be wrong. A pig parade is a terrible idea. Pigs hate to march, refuse to wear the uniforms, don't care about floats, and insist on playing country music ballads. Those are just some of the reasons. And trust me, this hysterical book has plenty more!

Praise For A Pig Parade Is a Terrible Idea…

* "If this book’s arch-toned text wasn’t flat-out funny enough, Hawkes’ deliciously down-and-dirty art takes the concept to a whole other level.... Horror will mix with hysterical laughter when kids (and adults) get ahold of this one." -BOOKLIST, STARRED review

* "Black's pitch-perfect porcine parody sets off at a brisk pace.... The Monty Pythonesque premise delivers laugh after laugh, while Hawkes's portraits of pigs chewing on their band hats, tromping on their horns, and floating into outer space with parade balloons will win over readers of all ages." - PW, STARRED review

"The winner of the Most Absurd Picture Book of the Year Award, if there were one, would have to go to 'A Pig Parade Is a Terrible Idea,' written by Michael Ian Black and drawn by Kevin Hawkes. The joke is in the comically drawn-out contrast between the cute marching pigs of our imagination and the realistically sticky, glistening-nosed, frowning hogs."--New York Times Book Review

* "The tongue-in-cheek tone of the text coupled with the large-scale illustrations and generous trim size make this a surefire storyhour read-aloud that will elicit laughter and cheers of delight."–- SLJ , STARRED review

Kevin Hawkes has illustrated more than forty books for children, included the New York Times bestseller The Library Lion, Weslandia, Michael Ian Black’s A Pig Parade Is a Terrible Idea, and Santa in Cincinatti. He lives in Southern Maine, where he can be found wandering aimlessly in his garden, unless forced indoors, where he creates imaginary landscapes with cobalt blue skies.
Loading...
or support indie stores by buying on