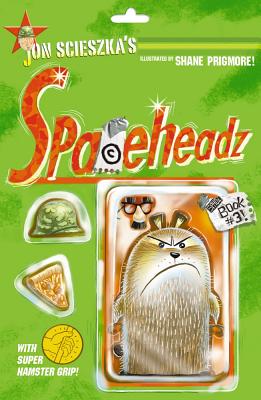 We're close to 3.14 million SPHDZ, but there is still a lot to be done. Michael K., Venus, TJ, and the SPHDZ are working hard to keep kids signing up to be Spaceheadz. But Agent Umber of the AAA (Anti Alien Agency) is relentless and the unseen leader of Spaceheadz turns out not to be who anyone expected!

Full of twists and turns, the third book in the out of this world series continues. And a bigger mystery is about to be revealed!

"Scieszka and Prigmore deliver the most madcap installment yet in their uber-illustrated series. Surprise villains (foreshadowed in previous volumes)! Surprise interstellar-parking-lot plans! Surprise doughnut upchuck! Nonfiction interludes on networks, group intelligence and symbiosis—not to mention the goofy websites—add to the fun.... Fans will be in heaven, especially at the certainty of further installments."—Kirkus Reviews

"With plenty of twists, lots of well-timed comic noises, and even a hilarious section narrated by
Major Fluffy, this is sure to delight fans, while recruiting new ones. Another laugh factory between covers."—Booklist

Shane Prigmore is an accomplished professional in the animation, film, and illustration fields. Shane won an Annie Award for his design work on the stop motion feature Coraline. He has also contributed his numerous talents to such projects as: How to Train Your Dragon, The Croods, Rise of the Guardians, Foster’s Home for Imaginary Friends, The Lord of the Rings: The Two Towers, and The Iron Giant...to name a few. Shane resides in Los Angeles.
Loading...
or
Not Currently Available for Direct Purchase