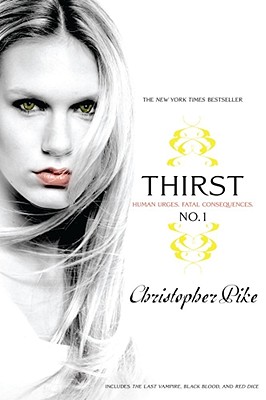 At five thousand years old, the vampire Alisa thought she was smart enough to stay out of trouble. But when her creator returns to hunt her, she must protect herself by befriending Ray, the boy who may be her only chance at finding her maker. When she begins to fall in love with Ray, all of a sudden there is more at stake than her own life. Originally published in 1994, this series netted more than 500,000 copies as individual titles and later as bind-ups. This hot new repackage will revive the series for today’s teen.

Christopher Pike is a bestselling young adult novelist and has published several adult books as well—Sati and The Season of Passage being the most popular. In YA, his Last Vampire series—often called Thirst—is a big favorite among his fans. Pike was born in Brooklyn, New York, but grew up in Los Angeles. He lives in Santa Barbara, California, with his longtime partner, Abir. Currently, several of Pike’s books are being turned into films and in the fall of 2022, Netflix will be releasing a ten-part series entitled The Midnight Club, based on Pike’s novel of the same name. The Midnight Club also draws from a half dozen of Pike’s earlier works. Presently, The Season of Passage is being adapted as a feature film by Universal Studios while Chain Letter—one of Pike all-time bestselling books—is also being adapted by Hollywood. At the moment, Pike is hard at work on a new YA series.