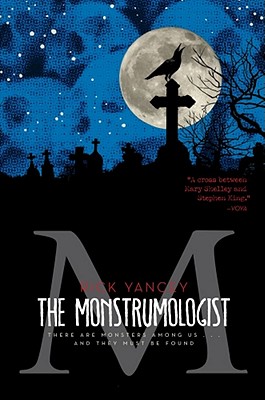 These are the secrets I have kept. This is the trust I never betrayed. But he is dead now and has been for nearly ninety years, the one who gave me his trust, the one for whom I kept these secrets. The one who saved me . . . and the one who cursed me.

So starts the diary of Will Henry, orphan and assistant to a doctor with a most unusual specialty: monster hunting. In the short time he has lived with the doctor, Will has grown accustomed to his late night callers and dangerous business. But when one visitor comes with the body of a young girl and the monster that was feeding on her, Will's world is about to change forever. The doctor has discovered a baby Anthropophagi--a headless monster that feeds through the mouthfuls of teeth in its chest--and it signals a growing number of Anthropophagi. Now, Will and the doctor must face the horror threatenning to overtake and consume our world before it is too late.

The Monstrumologist is the first stunning gothic adventure in a series that combines the spirit of HP Lovecraft with the storytelling ability of Rick Riorden.

"This gothic thriller will appeal to kids who like scary with high brow Dickensian writing...Yancey builds the action towards the climactic cemetary scene while also deftly handling the changing interpersonal dynamic between the doctor and Will. REaders who enjoyed Yancey's Alfred Kropp series...won't want to miss this one. Recommended."--Library Media Connection

"This story is gothic horror at its finest and most disturbing. A cross between Mary Shelley and Stephen King, the tale will force readers to stay up late to finish and then remain awake, afraid to shut off the lights...The richness of the language, the strain of wry humor, and the perfectly drawn characters make it a marvelous read...This book is perfect for readers who want their nightmares in a literary package."--VOYA

"This has all the elements of the best Victorian mystery and horror...Readers who like their horror truly horrible and yet archly distant and peppered with ecstatic Victorian-scented comments on the woes of the human condition will jump right in and not emerge until the last relieved gasp."--The Bulletin of the Center for Children's Books