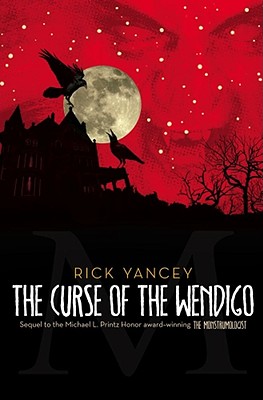 The Curse of the Wendigo (The Monstrumologist #2)

While attempting to disprove that Homo vampiris, the vampire, could exist, Dr. Warthrop is asked by his former fiancé to rescue her husband from the Wendigo, a creature that starves even as it gorges itself on human flesh, which has snatched him in the Canadian wilderness. Although Warthrop also considers the Wendigo to be fictitious, he relents and rescues her husband from death and starvation, and then sees the man transform into a Wendigo. Can the doctor and Will Henry hunt down the ultimate predator, who, like the legendary vampire, is neither living nor dead, whose hunger for human flesh is never satisfied? This second book in The Monstrumologist series explores the line between myth and reality, love and hate, genius and madness.

Praise For The Curse of the Wendigo (The Monstrumologist #2)…

* "Lush prose, devilish characterizations, and more honest emotion than any book involving copious de-facings (yes, you read that right) ought to have...Yancey has written both books in the Monstrumologist series as if they were the last, going for broke and playing for keeps, no matter who or what ends up on the chopping block. This is Warthrop’s The Hound of the Baskervilles; if we hold our breath, maybe part 3 will come faster."
--Booklist, starred review

"A page-turner of an historical horror that will simultaneously thrill readers and make them sick to their stomachs."--Kirkus Reviews

* "The chilling sequel to Yancey's Printz Honor book, The Monstrumologist, is as fast-paced, elegant, and, yes, gruesome as its predecessor."--Publishers Weekly, starred review

"The Curse of the Wendigo is certain to be popular with fans of The Monstrumologist (S & S, 2009), and the horror genre in general."--School Library Journal

"Fans of Rick Yancey's first book in this series, Printz Honor Award winner The Monstrumologist will not be disappointed by this sequel. Yancey maintains his excellent, literary fiction style...Once again, Yancey skillfully weaves a tale that touches readers at a visceral level and will linger long in the imagination.—VOYA

"The first-person narrative is brooding and atmospheric, conveying just the right sense of mystery and horror."--The Horn Book

Rick Yancey is the author of The Monstrumologist, The Curse of the Wendigo, The Isle of Blood, and The Final Descent. He is also the author of The Fifth Wave series. Rick lives with his wife Sandy and two sons in Gainesville, Florida. Visit him at RickYancey.com.
Loading...
or support indie stores by buying on
(This book is on backorder)