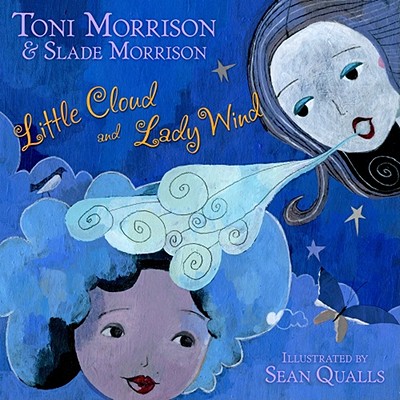 Little Cloud likes her own place in the sky, away from the other clouds. There, the sky is all hers. She is free to make her own way and go where she wishes. Can Lady Wind show Little Cloud the power of being with others? Will Little Cloud agree there is strength in unity and change her ways? A fresh take on a classic story, Little Cloud and Lady Wind will teach kids how to work together to achieve their goals.

The Morrisons present a modern fable about the need for independence as well as the beauty of being a part of everything else. Little Cloud discovers "I can be me and part of something too."--Yellow Brick Road, May/June 2010

Sean Qualls’s work is a mixed media combination of painting, drawing, and collage. He has illustrated many picture books, including Before John Was a Jazz Giant, which received a Coretta Scott King Honor Award; ThePoet Slave of Cuba, a BCCB Blue Ribbon Book; Dizzy, an ALA Notable and a Kirkus Reviews, School Library Journal, and Child Magazine best book, as well as BCCB Ribbon Book and a Booklist Editor's Choice; and Emmanuel’s Dream, which was a Schneider Award winner and an Amazon Best Book of the Month.  He lives in Brooklyn, New York.
Loading...
or support indie stores by buying on