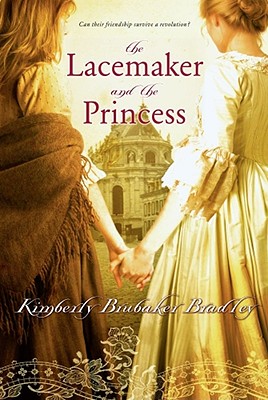 The Lacemaker and the Princess

ELEVEN-YEAR-OLD ISABELLE IS A LACEMAKER IN THE TOWN OF VERSAILLES.

One day as she delivers lace to the palace, she is almost trampled by a crowd of courtiers -- only to be rescued by Marie Antoinette. Before Isabelle can believe it, she has a new job -- companion to the queen's daughter. Isabelle is given a fashionable name, fashionable dresses -- a new identity. At home she plies her needle under her grandmother's disapproving eye. At the palace she is playmate to a princess.

Thrown into a world of luxury, Isabelle is living a fairy-tale life. But this facade begins to crumble when rumors of starvation in the countryside lead to whispers of revolution. How can Isabelle reconcile the ugly things she hears in the town with the kind family she knows in the palace? And which side is she truly on?

Inspired by an actual friendship between the French princess and a commoner who became her companion, Kimberly Brubaker Bradley offers a vivid portrait of life inside the palace of Versailles -- and a touching tale of two friends divided by class and the hunger for equality and freedom that fueled the French Revolution.

Kimberly Brubaker Bradley is the author of several historical novels, including For Freedom: The Story of a French Spy, which received starred reviews in Booklist and Kirkus Reviews and was an IRA Teacher's Choice, a VOYA Top Shelf Fiction selection, a New York Public Library Book for the Teen Age, and a Bank Street Best Book. She lives with her husband and two children in Bristol, Tennessee.
Loading...
or support indie stores by buying on