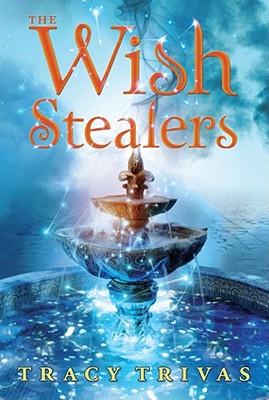 Griffin Penshine is always making wishes. But when an eccentric old woman named Mariah gives Griffin a box of shiny pennies, it sets in motion a desperate quest. The old woman was a wish stealer, who stole each penny from a wishing fountain decades earlier. Somehow, Griffin has to redeem the lost wishes, or the opposite of her own wishes will come true--and it could literally be a matter of life or death. Griffin's mission to right Mariah's awful wrongs allows her to meet some extraordinary people, and to do good beyond her wildest imagination. But can she do enough to reverse the curse in time to save the people she loves the most?

TRACY TRIVAS, a graduate of Dartmouth College, won a Dartmouth Graduate Fellowship to study Victorian Literature at Oxford University, England. She received her Masters Degree in English from Middlebury College.  She directed a Gifted and Talented program in a Los Angeles private school and has published gifted and talented workbooks as well as an adult non-fiction book,  A Princess Found. The Wish Stealers is her first book for children.  She lives in California with her family.
Loading...
or support indie stores by buying on