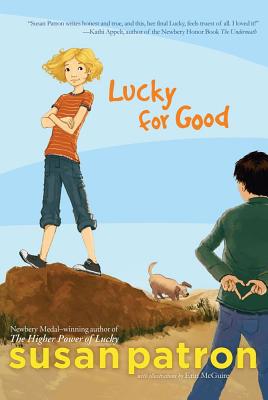 Will Lucky solve life’s mysteries before she turns twelve? The adventures that began with the Newbery Award–winner The Higher Power of Lucky come to a grand finale.

For eleven-year old Lucky, the universe is full of questions. Is that mysterious woman at the café Miles’s mom? Does her father not talk to her because he hates her? Will the Health Department ruin everything? Is she really going to go to hell? The answers are, in no particular order, nearly, no, yes, and a big fat “who knows?” But answers—like every little thing in the whole universe—are constantly evolving and, sometimes, the biggest questions have no answer at all. The best Lucky can do is never give up on maybe, just maybe, understanding things a little better before she turns twelve.
The Hard Pan trilogy that began with the Newbery-winning The Higher Power of Lucky concludes with Lucky and all of Hard Pan a little wiser—and a lot closer to our hearts.

Erin McGuire has illustrated many books for young readers, including The Real Boy by Anne Ursu. She lives in Dallas, Texas, and you can visit her at EMcGuire.net.
Loading...
or support indie stores by buying on