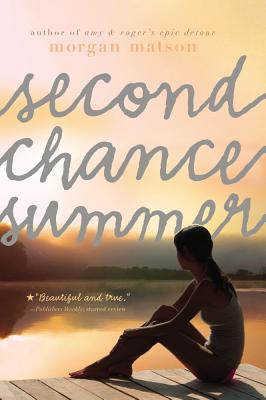 *"Matson has blended romance, humor, teen angst, boring summer jobs, and a truly tragic event into a wonderfully readable story, told in a manner that trusts teens’ intelligence. Jenny Han’s and Sarah Dessen’s fans will gobble this up."

“The exploration of the father-daughter relationship is warm, sensitive, and heartbreaking, with Taylor realizing how much she counts on the man she’s going to lose. Between the dreamy romance and the four-hankie family story, this is a satisfyingly emotional summer tale."
— BCCB

*"Matson writes subtly about complex family dynamics, grief, and the impending loss of a parent in a way that is both beautiful and true...Readers who love the work of Sarah Dessen and Jenny Han will feel intensely for this cast of vulnerable characters who demonstrate integrity, personality, and perseverance as they work to bridge the distances between them."
— Publishers Weekly, starred review

"[Second Chance Summer] is a sweet, well written coming-of-age book that pulls at the reader’s heartstrings...This is a compelling story that reads fast and grips readers until the very end."
— VOYA

*"This is a bittersweet, powerful tale of family devotion, the sustainability of true friendship, and the silent courage of loving someone enough to stay and watch them die."
— Booklist, starred review

“This is an incredible book—heartbreakingly funny and utterly un-put-down-able.”
— Lauren Myracle, New York Times bestselling author of Thirteen and TTYL

"One of the most touching, irresistible, and feel-good road trips I've been on in a long, long while. AMY & ROGER is a book to love."
— Deb Caletti

* "A near perfect summer read that should leave readers with a thirst for travel and romance."
— Publishers Weekly, starred review

"This entertaining and thoughtful summertime road trip serves up slices of America with a big scoop of romance on the side."
— Kirkus Reviews

Morgan Matson is the New York Times bestselling author of six books for teens, including Since You’ve Been Gone and Save the Date. She lives in Los Angeles but spends part of every summer in the Pocono Mountains. Visit her at MorganMatson.com.
Loading...
or support indie stores by buying on