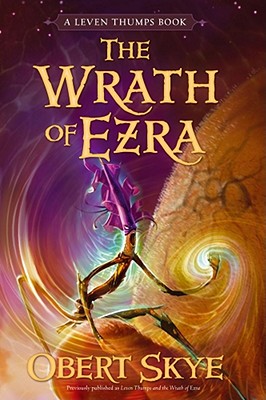 The Wrath of Ezra (Leven Thumps #4)

The dreams of mankind are in grave danger. The Dearth, the true evil beneath the soil, rises above ground and gains the strength he needs to defeat Leven Thumps. Lev, now the Want, is also gaining strength and must discover his new power before the Dearth finds him.

Meanwhile, Sycophant Run is on the brink of war, and the secret of the sycophants' vulnerability is more of a threat than ever -- can Clover and the sycophants protect the only gateway to Reality? And speaking of Reality, Terry and Addy are about to join forces with a onetime janitor and the angriest, most confused toothpick alive: Ezra. What kind of power is raging inside that sliver of wood?

Obert Skye was born on a stormy night in the back of a fast-moving taxi, in the middle of the week during an average-length year. He is the middle child in a family with an odd number of children. Obert’s interests include falling from great heights, devouring books, and fighting for Foo. He also likes the beach. The author of the bestselling Leven Thumps series, Obert travels around the world telling all who will listen about the importance of Foo. He currently lives in the United States in a place a bit colder than he would prefer.
Loading...
or support indie stores by buying on