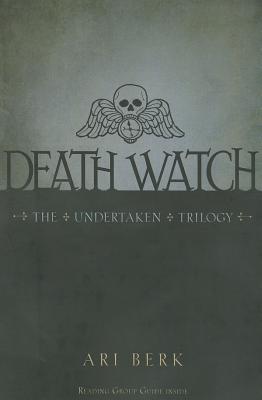 They say the dead should rest in peace. Not all the dead agree. This start to The Undertaken trilogy is a “thought-provoking gothic fantasy” and a “genuinely eerie tale” (Publishers Weekly).

When Silas Umber’s father, Amos, doesn’t come home from work one night, Silas discovers that his father was no mere mortician, but an Undertaker who worked to bring The Peace to lost and wandering souls. With Amos gone, Silas and his mother move back to Lichport, the crumbling seaside town where he was born, and Silas seizes the opportunity to investigate his father’s disappearance.
When his search leads him to his father’s old office, he comes across a powerful artifact: the Death Watch, a tool that allows the owner to see the dead. Death Watch in hand, Silas begins to unearth Lichport’s secret history—and discovers that he has taken on his father’s mantle as Lichport’s Undertaker. Now, Silas must embark on a dangerous path into the Shadowlands to embrace his destiny and discover the truth about his father—even if it kills him.
Critically acclaimed folklorist Ari Berk explores the worlds of the living and the dead, and the relationships between parents and children in an novel steeped in lore, mystery, and magic.