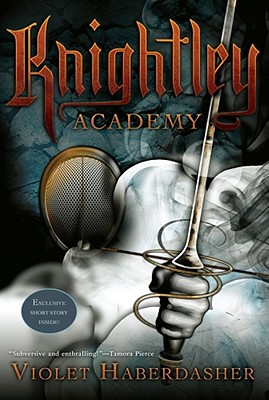 Henry Grim is a servant boy at the Midsummer School until he passes the elite Knightley Academy exam, a test that every Midsummer boy has mysteriously failed the past five years. Henry suddenly finds himself one of the first commoners studying at the Academy, alongside the cleverest and bravest--and most arrogant--young aristocrats in the country. But someone isn't too happy about Henry, and two other commoners, who have been let into the prestigious school. And that someone is out to sabtoge the three from becoming full-fledged Knights of the Realm--the goal of every student at the Academy. As Henry and the two other boys try to ward off their classmates' attempts to thwart their paths, they soon uncover a conspiracy that violates the Hundred Years' Peace treaty--and could lead to war! Can Henry manage to save his school and country from their enemies--and continue to study at the Academy?

Violet Haberdasher, the alter ego of Pulse author Robyn Schneider, was a lonely child who could always be found with her nose in a book. As soon as she was old enough, she left for the big city, where she attended an elite school for young ladies and enacted such shocking and improper misdeeds as becoming a stage performer. She currently resides in Manhattan.
Loading...
or
Not Currently Available for Direct Purchase