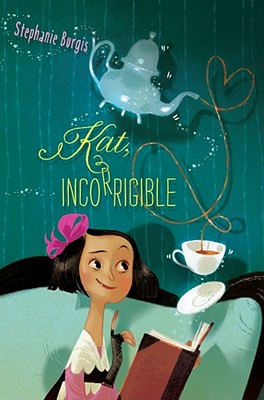 Katherine Ann Stephenson has just discovered that she's inherited her mother's magical talents, and despite Stepmama's stern objections, she's determined to learn how to use them. But with her eldest sister Elissa's intended fiancé, the sinister Sir Neville, showing a dangerous interest in Kat's magical potential; her other sister, Angeline, wreaking romantic havoc with her own witchcraft; and a highwayman lurking in the forest, even Kat's reckless heroism will be tested to the upmost. If she can learn to control her new powers, will Kat be able to rescue her family and win her sisters their true love?

"Burgis’ debut title rides on its swift pace and the delightfully feisty Kat, whose fearless and frequently impulsive actions will have readers cheering her on." --Booklist


"Regency romance and fantasy adventure all in one, this is a satisfying read and a promising beginning to a trilogy that is sure to be popular with middle school girls."

“Romance, humor and magic mark this brisk debut novel, the first of a trilogy set in an alternative Regency England…. Burgis’s command of the conventions of the genre is evident in characterization and plot, putting every element in place for a genteel romp…. Luckily, Kat is on hand to interfere with everyone’s plans. Enjoyable mayhem ensues.”

“Set in nineteenth-century England, this is a delightful story about a courageous, spirited, loveable girl who refuses to conform to society’s expectations. There’s plenty of humor, romance, and mystery as Kat cuts off her hair, disguises herself as a boy, and turns the lives of those around her upside down.”

Stephanie Burgis is the author of Masks and Shadows. She has published over thirty short stories for adults. Kat, Incorrigible (US)/A Most Improper Magick (UK) won the Waverton Good Read Children's Award in 2011 for Best Début Children's Novel by a British writer. It was followed by Renegade Magic/A Tangle of Magicks and Stolen Magic/A Reckless Magick. Born in Michigan, she now lives in Wales with her husband, writer Patrick Samphire, and their children. Before becoming a fulltime writer, she studied music history as a Fulbright Scholar in Vienna, Austria, and worked as a website editor for a British opera company.