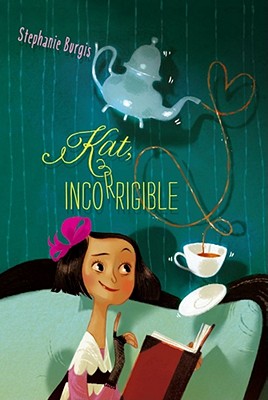 Now in paperback, the first installment of a Regency era trilogy starring a feisty heroine with a taste for adventure.

Twelve-year-old Katherine Ann Stephenson has just discovered that she’s inherited her late mother’s magical talents, and despite Stepmama’s stern objections, she’s determined to learn how to use them. But with her eldest sister Elissa’s intended fiancé, the sinister Sir Neville, showing a dangerous interest in Kat’s magical potential; her other sister, Angeline, wreaking romantic havoc with her own witchcraft; and a highwayman lurking in the forest, Kat’s reckless heroism will be tested to the utmost. If she can learn to control her new powers, will Kat be able to rescue her family and win her sisters their true loves?

In this charming blend of Jane Austen–era culture, magical whimsy, and rollicking adventure, readers will find a true friend in the refreshingly unladylike Kat Stephenson.

Stephanie Burgis grew up in East Lansing, Michigan, addicted to the novels of Jane Austen and J.R.R. Tolkien. She decided to be a writer when she was seven and sold her first short story when she was fifteen. She is also the author of Renegade Magic, the sequel to Kat, Incorrible. She lives in Wales with her husband, baby, and border collie. Visit her at StephanieBurgis.com.
or
Not Currently Available for Direct Purchase
Copyright © 2020 American Booksellers Association