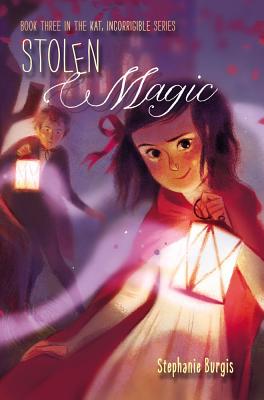 In this conclusion to the Regency-era fantasy trilogy Kirkus Reviews calls “enjoyable mayhem,” Kat is tasked with saving her family, the Order of the Guardians, and England itself.

With just days to go before her sister Angeline’s long-delayed wedding to Frederick Carlyle, the impetuous Kat Stephenson has resigned herself to good behavior. But Kat’s initiation into the magical Order of the Guardians is fast approaching, and trouble seems to follow her everywhere.

First, Kat must contend with the wretched Mrs. Carlyle’s attempts to humiliate her sister; the arrival of the mysterious Marquise de Valmont, who bears suspicious resemblance to Kat’s late mother; and Frederick’s bewitching cousin Jane, who has Charles Stephenson tripping over his feet. But when a menacing boy with powerful magic starts hunting Kat, a dastardly villain tries to kill Angeline, and the Guardians face a magical robbery that could spell the end of their Order, propriety becomes the least of Kat’s concerns.

Can Kat save her sister’s life, the Order of the Guardians, and England itself before it’s too late?

"With a multilayered plot, lovable characters, and laugh-out-loud wit, STOLEN MAGIC is a delightful conclusion to the Kat, Incorrigible trilogy that will leave readers wishing for more."
— KidsReads.com, April 2014