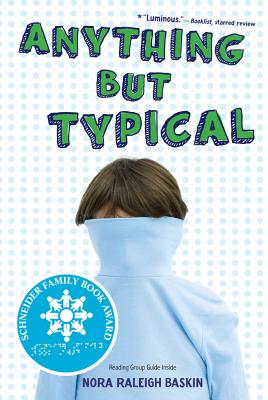 “Anything But Typical is the story of a 6th-grade autistic boy's life, as told from inside his own head. While writing stories on the Web, Jason begins to interact online with a 'neurotypical' girl. All is fine until he wins a writing contest and a scholarship to a writing camp, where his friend is waiting to meet him, face to face. I loved seeing the world as it appears from Jason's perspective.”
— Rene Kirkpatrick, Third Place Books, Lake Forest Park, WA
View the List

Told from the first-person perspective of an autistic boy, Nora Raleigh Baskin’s novel is an enlightening story for anyone who has ever worried about fitting in.

Jason Blake is an autistic twelve-year-old living in a neurotypical world. Most days it's just a matter of time before something goes wrong. But Jason finds a glimmer of understanding when he comes across PhoenixBird, who posts stories to the same online site as he does.

Jason can be himself when he writes and he thinks that PhoneixBird-her name is Rebecca-could be his first real friend. But as desperate as Jason is to met her, he's terrified that if they do meet, Rebecca wil only see his autism and not who Jason really is.

By acclaimed writer Nora Raleigh Baskin, this is the breathtaking depiction of an autistic boy's struggles-and a story for anyone who has ever worried about fitting in.

Praise For Anything But Typical…

* “Luminous....This is an enormously difficult subject, but Baskin, without dramatics or sentimentality, makes it universal.”—Booklist, starred review

"Baskin reveals not only the obstacles that Jason faces, but also his fierce determination to be himself at all costs. Jason is a believable and empathetic character in spite of his idiosyncrasies. Baskin also does a superb job of developing his parents and younger brother as real people with real problems, bravely traversing their lives with a differently abled child without a road map, but with a great deal of love."--School Library Journal

“A children’s book that’s every bit as subtle and smart as the best adult novel.”—nytimes.com

Nora Raleigh Baskin is the ALA Schneider Family Book Award–winning author of Anything But Typical. She was chosen as a Publishers Weekly Flying Start for her novel What Every Girl (Except Me) Knows, and has since written a number of novels for middle graders and teens, including The Truth About My Bat Mitzvah, The Summer Before Boys, and Ruby on the Outside. Nora lives with her family in Connecticut. Visit her at NoraBaskin.com.
Loading...
or support indie stores by buying on