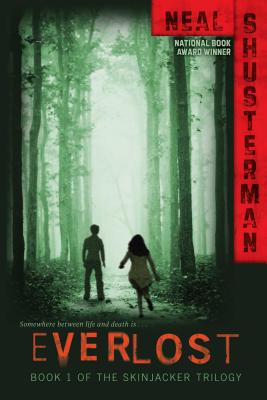 Nick and Allie don’t survive the car accident, but their souls don’t exactly get where they’re supposed to go either. Instead, they’re caught halfway between life and death, in a sort of limbo known as Everlost: a shadow of the living world, filled with all the things and places that no longer exist. It’s a magical, yet dangerous place where bands of lost kids run wild and anyone who stands in the same place too long sinks to the center of the Earth.

Neal Shusterman is the New York Times bestselling author of more than thirty award-winning books for children, teens, and adults, including the Unwind dystology, the Skinjacker trilogy, Downsiders, and Challenger Deep, which won the National Book Award. Scythe, the first book in his latest series, Arc of a Scythe, is a Michael L. Printz Honor Book. He also writes screenplays for motion pictures and television shows. Neal is the father of four, all of whom are talented writers and artists themselves. Visit Neal at StoryMan.com and Facebook.com/NealShusterman.
Loading...
or
Not Currently Available for Direct Purchase