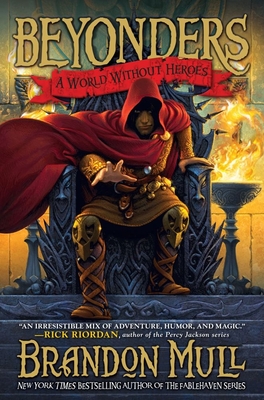 Jason Walker has often wished his life could be a bit less predictable—until a routine day at the zoo ends with Jason suddenly transporting from the hippo tank to a place unlike anything he's ever seen. In the past, the people of Lyrian welcomed visitors from the Beyond, but attitudes have changed since the wizard emperor Maldor rose to power. The brave resistors who opposed the emperor have been bought off or broken, leaving a realm where fear and suspicion prevail.

In his search for a way home, Jason meets Rachel, who was also mysteriously drawn to Lyrian from our world. With the help of a few scattered rebels, Jason and Rachel become entangled in a quest to piece together the word of power that can destroy the emperor, and learn that their best hope to find a way home will be to save this world without heroes.

Praise For A World Without Heroes (Beyonders #1)…

"Brandon Mull is a wizard with words. With Beyonders, he has conjured one of the most original fantasies I've read in years—an irresistible mix of adventure, humor, and magic." —Rick Riordan, author of the Percy Jackson and the Olympians series

“Mull elevates the genre, pairing humorous and imaginative scenarios with intelligence and well-written dialogue . . . With "Beyonders," Mull has taken the tried-and-true quest genre and reinvigorated it with a dense but extremely well-written follow-up to his bestselling "Fablehaven" series.”
--Los Angeles Times