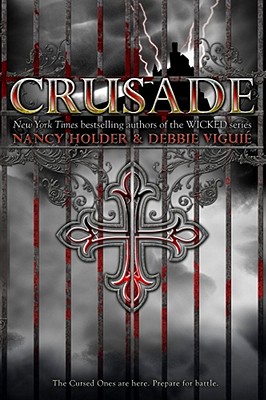 For the past two years, Jenn has lived and trained at Spain’s Sacred Heart Academy Against the Cursed Ones. She is among the few who have pledged to defend humanity or die trying. But the vampires are gaining power, and the battle has only just begun.

Forced to return home after death takes a member of her family, Jenn discovers that San Francisco is now a vampire strong-hold. As a lone hunter apart from her team, Jenn is isolated—and at risk. She craves the company of her fighting partner, Antonio: his protection, his reassurance, his touch. But a relationship with Antonio comes with its own dangers, and the more they share of themselves, the more Jenn stands to lose.

Then Jenn is betrayed by one who was once bound to protect her, causing her to doubt all she had held as true. To survive, Jenn must find the courage to trust herself—and her heart.

"Expect Wicked, Twilight, and True Blood fans to gulp down this massive tome and grab for the sequel."
--Booklist, September 2010

Debbie Viguié’s Simon Pulse books include the New York Times bestselling Wicked series and the Once upon a Time novels Violet Eyes, Scarlet Moon, and Midnight Pearls. She lives in Florida with her husband, Scott. Visit her at DebbieViguie.com.
Loading...
or
Not Currently Available for Direct Purchase