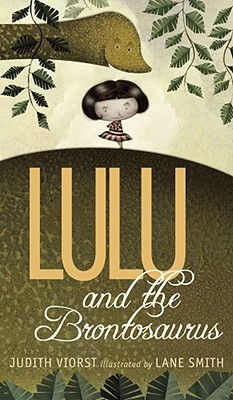 Lulu and the Brontosaurus (The Lulu Series)

It's Lulu's birthday and she's decided she'd like a pet brontosaurus as a present. When Lulu's parents tell her that's not possible, Lulu gets very upset. She does not like it when things don't go her way. So she takes matters into her own hands and storms off into the forest to find herself a new pet, all the way singing:

In the forest Lulu encounters a number of animals; a snake, a tiger, a bear, all of whom don't particularly impress her. And then she finds him...a beautiful, long-necked, gentle, graceful brontosaurus. And he completely agrees with Lulu that having a pet would be a wonderful thing, indeed! Lulu thinks she's gotten her birthday wish at last. Until she realizes that Mr. Brontosaurus thinks that she would make an ideal pet for him!

How will Lulu ever get out of this sticky situation without throwing a fit (Mr. B does not respond well to those), or using force (Mr. B is much to tall to bonk on the head with her suitcase), or smushing her pickle sandwich?

Praise For Lulu and the Brontosaurus (The Lulu Series)…

"Plenty of child-friendly humor. . . . This inventive, lighthearted fantasy should be a solid hit with young readers looking for a lively first chapter book." --School Library Journal

Lane Smith is the author-illustrator of Grandpa Green and the illustrator of The Stinky Cheese Man and Other Fairly Stupid Tales, both Caldecott Honor winners. His books have appeared on the New York Times Best Illustrated list four times, and several of his books, including It’s a Book and John, Paul, George & Ben, have been New York Times bestsellers. He lives with book designer Molly Leach in rural Connecticut, and can be visited at LaneSmithBooks.com.
Loading...
or support indie stores by buying on