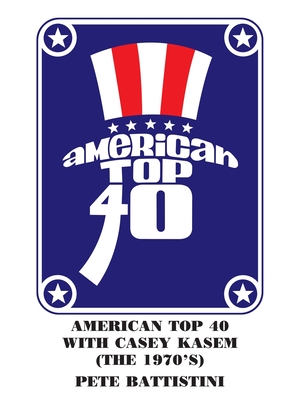 Long regarded as an expert of Casey Kasem's American Top 40 radio program, Pete Battistini provides highlights and summaries of nearly 500 AT40 programs from the 1970s, along with a highly-detailed list of all subscribing AT40 radio stations. Peppered with various anecdotes and perspectives, he opens up his archives and offers more than 100 AT40 illustrations - memos, documents, advertisements, photographs, script cards, radio surveys and much more - to give a "Casey's coast-to-coast" inside look at the America's favorite hit parade. Finally, he provides his own 'confessions' describing how AT40 became a weekly habit. For anyone who spent time listening to Casey Kasem's countdown every weekend, here's an opportunity to relive the music and stories of the 1970s.

Pete Battistini was born in Gary, Indiana in 1955. Thirteen years later he picked up his first radio station record survey - a Top 40 listing of WLS' (Chicago) Hit Parade. This lead to a fascination with artist and music variety typically found in Top 40 radio and in Top 40 countdowns. In 1971, Battistini heard Casey Kasem's American Top 40 for the first time and was instantly captivated. He has accumulated one of the largest collections of American Top 40 memorabilia, including an AT40 promotional poster seen here that he obtained from former WICB (Ithaca, New York) general manager Gene Hallahan. His enthusiasm for Casey Kasem's radio show carried over into a desire to document AT40 program information, the 1970s in particular. Much of that data is presented in this text. Additions, changes or suggestions to this text are welcomed by the author. Contact Pete Battistini at at40@aol.com
Loading...
or support indie stores by buying on