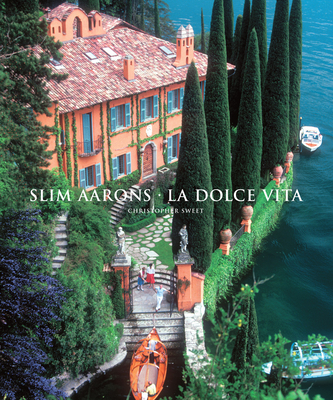 This lavish volume of Slim Aarons photography revels in this photographer’s decades-long love affair with Italy. From breathtaking aerials of the Sicilian countryside to intimate portraits of celebrities and high society taken in magnificent villas, Slim Aarons: La Dolce Vita captures the essence of “the good life.”

Slim Aarons first visited Italy as a combat photographer during World War II and later moved to Rome to shoot for Life magazine, yet even after relocating to New York, he would return to Italy almost every year for the rest of his life. The images collected here document the aristocracy, cultural elite, and beautiful people, such as Marcello Mastroianni, Ursula Andress, Joan Fontaine, and Tyrone Power, who lived la dolce vita in Italy’s most fabulous places during the last 50 years.

Tracing a journey from the 1940s to the 1990s, Slim Aarons: La Dolce Vita takes us to Italy’s fashionable resorts, to its magnificent historic cities and small atmospheric towns, and to glorious landscapes, all reflecting the pleasures of the Italian art of living. Here is a rare glimpse into the lives of the preeminent families’ formal and informal circumstances, photographed in their palaces and on their estates, at their vacation villas and favorite haunts. Handsome men are in tuxedoes. Voluptuous women wear their most glorious gowns. Families walk beautiful gardens.

Here is your chance to experience la dolce vita in this one-of-a-kind coffee table celebration of all things Italian.

Christopher Sweet is the former editor in chief of Viking Studio and the Vendome Press. He was the editor of Slim Aarons’s Once Upon a Time and A Place in the Sun and has written several other books on art and photography.

Slim Aarons (1916–2006) was among his generation’s most influential photographers. His photographs have appeared in countless magazines, including Town & Country, LIFE, and Holiday.
Loading...
or support indie stores by buying on