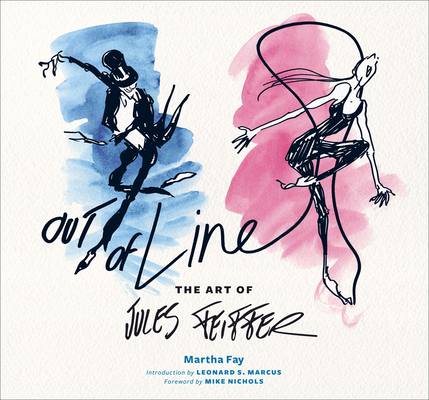 The Art of Jules Feiffer

Martha Fay is an essayist and the author of several works of nonfiction, including A Mortal Condition and walking guides to New York City, Rome, and Tuscany. She lives in Brooklyn and Italy.

Leonard S. Marcus is a historian, biographer, and critic whose award-winning books include Margaret Wise Brown: Awakened by the Moon; Dear Genius: The Letters of Ursula Nordstrom; The Annotated Phantom Tollbooth; and Maurice Sendak: A Celebration of the Artist and His Work. He is a regular contributor to the New York Times Book Review, writes a column on illustrated books for the Horn Book magazine, and is a three-time judge of the New York Times Best Illustrated Books of the Year prize. Marcus lectures about his work to audiences throughout the U.S. and around the world and has been featured on numerous programs on television and radio. He is a founding trustee of the Eric Carle Museum of Picture Book Art and teaches a popular course on children’s literature and child development at New York University.

Mike Nichols was a writer, director, producer, and comedian, and one of only twelve people who have won all four major American entertainment awards (EGOT): four Emmys (two apiece for Wit, Angels in America), a Grammy (An Evening with Mike Nichols and Elaine May), an Oscar (The Graduate), and nine Tonys (Barefoot in the Park, Luv, The Odd Couple, Plaza Suite, The Prisoner of Second Avenue, Annie, The Real Thing, Monty Python’s Spamalot, and Death of a Salesman). Other noteworthy films include Who’s Afraid of Virginia Woolf?, Carnal Knowledge, and Working Girl. Among his many honors were the Lincoln Center Gala Tribute (1999), the National Medal of Arts (2001), the Kennedy Center Honors (2003), and the AFI Life Achievement Award (2010).