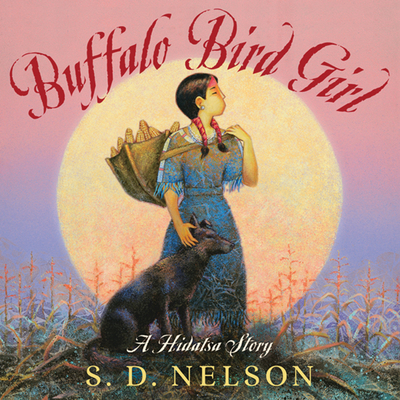 Buffalo Bird Girl (ca. 1839-1932) was a member of the Hidatsa, a Native American community that lived in permanent villages along the Missouri River on the Great Plains. Like other girls her age, Buffalo Bird Girl learned the ways of her people through watching and listening, and then by doing. She helped plant crops in the spring, tended the fields through the summer, and in autumn joined in the harvest. She learned to prepare animal skins, dry meat, and perform other duties.

There was also time for playing games with friends and training her dog. When her family visited the nearby trading post, there were all sorts of fascinating things to see from the white man’s settlements in the East.

Award-winning author and artist S. D. Nelson (Standing Rock Sioux) captures the spirit of Buffalo Bird Girl by interweaving the actual words and stories of Buffalo Bird Woman with his artwork and archival photographs. Backmatter includes a history of the Hidatsa and a timeline.

**STARRED REVIEW**
"The extraordinary illustration of this handsome volume begins with the endpaper maps and features acrylic paintings of the Hidatsa world reminiscent of traditional Plains Indian art. Pencil drawings and relevant, carefully labeled photographs round out the exquisite design. All the artwork both supports and adds to the text. An extensive author’s note and timeline supplement this beautiful tribute."

**STARRED REVIEW**
"This is a lovely and graceful introduction to a way of life that persists despite cultural obstacles and the march of time."

"Nelson's quiet, respectful tone capably balances the factual details of daily life in the Hidatsa tribe with the obvious joy and nostalgia Buffalo Bird Girl feels toward her childhood."

— The Bulletin of the Center for Children's Books

"As a writer, storyteller, and traditional artist of the Sioux people, his perspective is genuine and effectively portrayed. This book would be enjoyable for anyone interested in history, but would also be an effective resource in the classroom to support the curriculum.”

An enrolled member of the Standing Rock Sioux Tribe in the Dakotas, S. D. Nelson is descended from Norse and American Indian heritage. He is the author and illustrator of numerous award-winning children’s books inspired by his Great Plains heritage, including Black Elk’s Vision, The Star People, and the middle-grade nonfiction book Crazy Horse and Custer: Born Enemies. His books have received the American Indian Library Association Honor Book Award, the Spur Award from the Western Writers of America, and the American Library Association Notable Book Award. Nelson has lectured at the National Museum of the American Indian/Smithsonian in Washington, DC, and has presented the keynote address for Read North Dakota. The artist’s paintings are held in many permanent collections including the National Museum of the American Indian in Washington DC, the National Museum of the Marine Corps in VA, Little Bighorn Battlefield National Monument in MT, the Crazy Horse Monument in SD, and the State Historical Societies of South Dakota, North Dakota, and Minnesota. Combined with the stories he tells Nelson’s art reveals the richness and depth of Lakota life. He creates with acrylic paint which he brushes, sponges, splatters, and sprays. His artwork offers a contemporary interpretation of traditional Lakota imagery. Visit: www.sdnelson.net.
Loading...
or
Not Currently Available for Direct Purchase