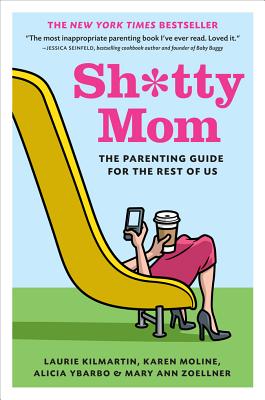 The Parenting Guide for the Rest of Us

Sh*tty Mom is the ultimate parenting guide, written by four moms who have seen it all. As hilarious as it is universal, each chapter presents a common parenting scenario with advice on how to get through it in the easiest and most efficient way possible. With chapters such as “How to Sleep Until 9 A.M. Every Weekend” and “When Seeing an Infant Triggers a Mental Illness That Makes You Want to Have Another Baby,” as well as a Sh*tty Mom quiz, this is a must-have, laugh-out-loud funny book for the sh*tty parent in all of us.

“A totally hilarious and uncensored look at some of the impossible situations we mothers find ourselves in.” —TheBump.com

“Smartly, brashly, nearly criminally funny. It also—no small thing—carries a powerful message to all parents, but especially moms, that distilled to its essence is this: chill.” —Time.com

“As the attachment parenting craze has hit a zenith in American culture, four very funny moms—comedy writers, TV producers, and a novelist—blast open a long-locked safe filled with frustrations faced by all modern mothers, with sympathetic and sharp humor. . . . The authors’ unfiltered candor is a welcome reminder for readers that they're not alone. . . .” —Publishers Weekly starred review

“Both funny and practical.” —Brooklyn Based.net

“Finally, Sh*tty Mom does for motherhood what Chelsea Handler does for female scatology. It’s a long overdue little burst of honesty from the supposed minority of mothers who are, in fact, not that maternal. . . . After a generation of supermoms one-upping each other in dead earnest on playgrounds and schoolyards, the emerging mass appeal of Sh*tty Mom is a welcome relief.” —The New York Observer

"Witty, wise, and wicked! With tongue planted firmly in cheek, these savvy moms dispense some much needed comic relief about raising kids in our crazy culture."?
--Dr. Harvey Karp, bestselling author of The Happiest Baby on the Block

“The most inappropriate parenting book I've ever read. Loved it. The perfect book for any mother who wants to laugh instead of cry at those cringe-worthy moments and the universal indignities we experience on a daily basis.”
--Jessica Seinfeld, bestselling cookbook author and founder of Baby Buggy

“An antidote to the hostage situation that is modern parenting…subversive, delicious, and spit-out-your-latte funny.”
--Pamela Druckerman, bestselling author of Bringing Up Bebe

Laurie Kilmartin is an Emmy-nominated writer for CONAN on TBS, and, as a stand-up comedian, has appeared on CONAN, Last Comic Standing, Jimmy Kimmel Live, and Comedy Central. She lives in Los Angeles with her son.

Karen Moline is a journalist and author who has written more than two dozen nonfiction books, as well as two novels. Karen and her son live in New York City.

Alicia Ybarbo is a four-time Emmy award–winning producer. She has worked on NBC’s TODAY show since 2000. She lives in New York City with her husband and two children.

Three-time Emmy award–winning producer Mary Ann Zoellner has worked at NBC news for 16 years. She lives in New York City with her husband and two daughters.
Loading...
or
Not Currently Available for Direct Purchase